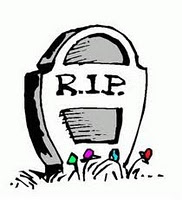 Someone died right outside Raft3r’s house yesterday.
Even for Malibay, that rarely ever happens.
Apparently, a middle aged woman collapsed on the street from a heart attack.
Sprawled to the ground, she was immediately surrounded by curious villagers.
Instead of calling for help, people just gathered around her and stared in amusement.
A relative of the woman knocked on our door to ask for help.
They wanted a car to bring her to a nearby hospital. We readily obliged.
Even before they can take her to a doctor, she passed away.
I do not know the woman personally. I would like to think she has already lived a full life. But I can’t help but think about her unfinished business on earth.
Death is already an accepted part of life. It is the uncertainty as to when death will come knocking at your door that is the hardest to deal with.
Posted by Raft3r at 3:20 AM

its uncertainty makes it hard to accept therefore death is not an accepted part of life. first of all, if death was accepted, people would live their lives differently for sure. condolences to your neighbor even though you don't know her.

kawawa naman siya at sa daan siya namatay. my friend has a clinic there but he's a dentist. ill check if he learned about this.

may her soul find peace.

It's such a typical Pinoy thing to stand by the wayside and observe what will happen next.

I imagine that woman may be alive today if someone actually took it upon themselves to care.

Did it make you wanna hug everyone around you and tell them you love them?

laieesha, Hindi naman, It hasn't come to that. Hehe

But if I have my way, I'd rather die of a sickness so I can have more time to spend to my family. I don't want a suddent death. But it's really up to God to determine how He will take my life. :)

Oh my!
Den, the woman you are talking about is Tita Olive Coral, she is an active church servant in our Parish. When I heard the news it crushed my heart. I'm in Ilo-ilo right now for a training.
It suddenly brought back memories to me... I felt tears roll down my eyes... She has breast C.A. and I heard that a day before she passed away, she had chemo... and because it was fiesta that morning, she asked her husband that they hear mass... They were already preparing for mass when she suddenly collapsed and when she was brought to Makati Med she was pronounced as D.O.A.
Grabe, Makati Med, Breast C.A., Death, Active Church servant it's like we are talking about my Mom.
Brighter side of things... They are in a better place than us. No more worries... No more stress... Just at peace with our Creator.
Eternal Rest Grant unto Tita Olive and my Mother Marycon oh Lord and let perpetual light shine upon them...May they rest in peace, AMEN!

mimi, Hey! So glad to hear from you. I still have Dj's Xmas gift! Hehe

Dati nung bata pa ko, while on a car, we passed by a jeepney driver who got hit with an arrow by a holdupper (labo nga, pana ang ginamit). Buhay pa yung driver, so my parents decided to bring him to the hospital. They placed him at the back, right beside me. I freaked out. Sigaw ako nang sigaw palibasa totoy pa ko nun. =P

liza, You got that right. Pana-panahon din lang yan.

Ever since my mom died when I was 9, I realized how fleeting life is; that tomorrow is never promised.

So life is too short to be wasted on hatred, bitterness, negativity and meaningless things.

So consider yourself uber lucky. :P

For those left behind, death can completely change one's life.

wendy, Nyahaha. You should work for us. Dami artista lagi samin. Hehe

same thing happened to a neighbor a few years back. we helped but his feet was cold when we carried him to the car.

kaya we should be thankful we're alive. :D

kawawa naman.. May she rest in peace