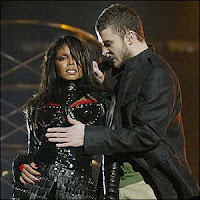 Wifey's back!
Raft3r just purchased Janet Jackson’s new CD, Discipline.
I’m so stoked!
I was like a kid in a candy store! I have been waiting for this like crazy.
Still hurting from disappointing album sales since her nipple exposing performance in 2004’s Super Bowl Half Time Show, Discipline is aimed to put her back on top.
MTV, who ironically crowned Janet as their first Icon, banned her and refused to play all her videos since the wardrobe malfunction.
Even US radio, stopped playing her songs.
Justin Timberlake, the coward who tore off her costume, survived the scandal without a scratch.
He went on to host several MTV events, gained some street cred and sold millions of records.
Janet, an African American female artist, was singled out as the perpetrator.
I am not alone in saying that her gender and race were contributing factors to this fallout.
America is still harsh and less forgiving to minorities.
For instance, Madonna has definitely done worse and yet she is still TRL material. Being white certainly has its privileges.
Four years later, MTV is kissing Janet’s ass.
They are definitely making amends. They are now promoting my wife’s new material. She has recently appeared on TRL.
The video for her new single Feedback is on heavy rotation. Janet is currently MTV’s Artist of the Week.
With more than 100,000,000 albums sold worldwide, Janet is one of the top selling artists of all time.
You can never put a good woman down.
Posted by Raft3r at 6:16 PM